A military officer laments about effects of galamsey

The end result is that these illegal mining activities end up polluting our water bodies which serves as our primary source of portable drinking water for the people. But unfortunately, the destruction of our forests and water bodies are taking place all at once.


Only a few years ago, the issue was with the illegal logging of trees in our forests for timber, but today it is the destruction of the same forests to mine for gold which in turn has a rippling effect on the pollution of our precious God given water bodies.

The military taskforce which was sent in to fight the galamsey menace is doing their best, for almost two weeks now, they have been able to chock some successes.

But even they themselves are complaining about the mandate given them not being adequate enough to deal fully with the situation. They want to go all out to clear these environmental destroyers out of the way, but the politicians don't seem to have the political will to grant them the power to wage an all out war against galamsey.

Can you imagine the extent to which some of our exotic wild life species are being driven to the brink of extinction from the forest? What about the fishes in the rivers which are being polluted with dangerous chemicals like Mercury and Cynide? How would all this destruction impact on the lives of the poor rural folks out there whose livelihood solely depend on the arable lands and rivers? The issues are grave.

The situation has become really bad and something drastic has to be done about this clear and present danger.

The officer captured in the viral video has called on the powers that be (government) and other mining stakeholders, to review the 100-meters caveat governing mining around river bodies. To him, it should be increased to 2Km.

The military officer lamented that the 100 meter distance won't work, in fact it isn't working because the illegal miners are operating far away from the river banks and polluting the water.

The said video which surfaced online on Friday has gone viral and I just hope the officer won't get himself into trouble with his superiors for speaking the way he did.

The military officer with the rank of Major is heard in the video chastising the Chinese man who had been arrested for operating the water pump at the river bank saying;
“Look, look at our water, you see the problem you’ve caused? You come to our country and destroying our water... the water we will drink. You, can you drink this? So you see, this is our problem. These guys are well established with machines …”
He further went on to explain their modus operandi. The Chinese had installed two heavy pumps at the river bank. One pumps water from the river into the open pit mine about 1Km away in the deep forest; the other pumps the used water for washing off the gold back into the river hence polluting it in the process. 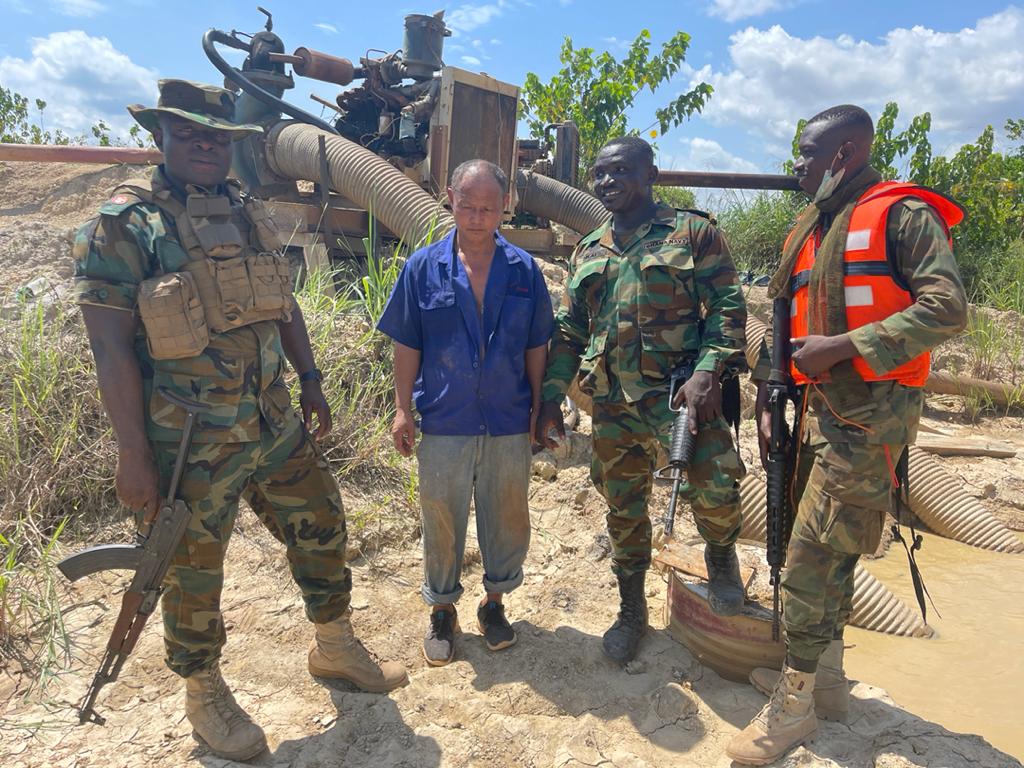